The Easy Way Is Hard Enough 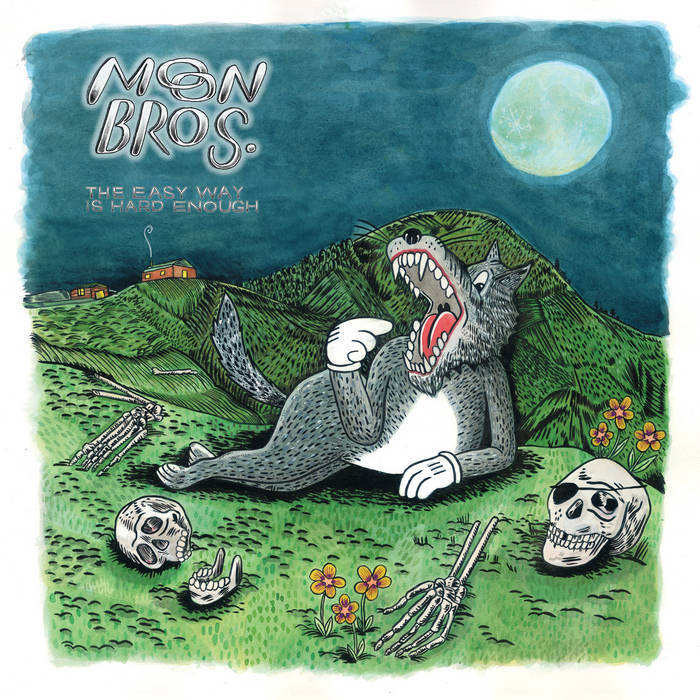 Of all the adolescence despicability expressed through video since the advent of YouTube, one of the most maddening is what’s known as the “knockout game”. This “game” is played largely by young male idiots (forgive the redundancy) who take it upon themselves to punch random pedestrians in the head in an attempt to capture a coup de grâce on camera. Matthew Schneider, helmsman and sometimes sole member of the ever-evolving musical project Moon Bros., became one such punchee while strolling home after a gig one night in Chicago. Only Schneider wasn’t knocked out in the attack. This is the kind of person he is. He did, however, get his prized electric guitar stolen by these half-assed Holyfields. But instead of sulking over his loss and victimhood, he took it all as a sign to change direction and focus on acoustic guitar instead. This is also the kind of person he is. In fact, he called it “the best day of his life”.

His new LP The Easy Way is Hard Enough raises a toast with the same glass-half-full that Schneider has carried from his days as a young guitar prodigy in rural Illinois to his current status as a woodworker and carpenter in Los Angeles. After healing from a broken leg that he sustained in a hit-and-run-- this time involving a car, and not a fist-- Schneider kept honing his style until each pluck, strum, and hammer-on exuded his own character, skill, and sincerity as a human being and musician. So many fingerstyle virtuosos fall into one trap or another; bad production, hollow showboating, predictable influences, but Schneider bypasses all the tropes as if they simply never entered into culture at large. In doing so, he steals the subgenre and gives it back to the weirdos, rendering it more palatable and listenable than it has been since the early ‘70s. In our “post-truth” age Schneider’s music feels refreshingly un-angled. If there is any theme to be found, it is that of pure earnestness.

On “OO Bub” the drum machine abruptly switches on, doing its best impression of a chugging steam-engine, and The Easy Way… begins. Over the rhythm, Schneider’s notes roll skillfully and effortlessly into one another aside joyous howls and grinning harmonica. As the song quietly sputters out, “Footsteps” appears on its heels with zero hesitation. Gorgeous, finger-tapped fractals of 12-string guitar tessellate outward and back in, while a pedal-steel acts as a gentle barrier to it all like water lapping against a stoney wall in some quiet corner of a lake. “The Ballad of Joe Buck”, with its two-step rhythm and exuberant picking, bursts through the solitude in a dusty-road jitter, coming across as a hard-nosed, but lighthearted rebuttal to the philosophizing of the previous song. “Temporary Thoughts” pulls the contemplative vibe back out, and Schneider’s lyrics show up here at the very middle of the album, fashionably late, but welcome nonetheless. The vocalizing expands on the next track “Goes” wherein Schneider ends each of his verses by crooning something of an autobiographical motto: “it’s all gonna work out, yes it is.” Any time he sings it is brief and respectful to his guitar playing, adding to his string-band tapestry rather than hoisting into the foreground and blocking the view.

By the time The Easy Way… reaches “Okie” the river rapids have emptied out into a moonlit cove in one of the most passive, yet most brooding moments on the record. Here Schneider pulls off what the best psychedelic-era acoustic records do: the subtle blend of blues with the minor key drones and flutters of Indian classical ragas that led to a new form of contemplative music for the counterculture of the late 1960s and beyond. Schneider doesn’t just dust it off and call it his own, rather he coaxes it from his chakras, paying no mind to those oversimple idioms and their qualifiers. Continuing the quietude, more spirographic fretwork winds down to a gradual close with “Nasty Fresh” concluding the punctual and introspective journey that is The Easy Way is Hard Enough, a suite of adept guitar vignettes that prioritize heart over skill, yet possess a wealth of both.

The cover was penned by Tortoise’s John Herndon after Schneider instructed him to listen to album, “dream about it”, and then come up with an image. The result was a cartoon wolf under a full moon, sardonically pointing at its own open mouth amid some scattered human bones. At first sight it’s hard to know which part, if any, is supposed to represent Schneider. Is he the skeletal remains? Is he the wolf? Upon listening to The Easy Way is Hard Enough it becomes clear that he is both, and that he delights in the freedom of such dichotomies. This time around he has crafted an album that is somehow relentless and reflective, gruff and affable, intelligent and earthy, flashy and humble, in a way that only Matthew Schneider seems capable of.

All Songs Written by:
Matthew Schneider

Bandcamp Daily  your guide to the world of Bandcamp

Tropical and transportive tunes with guests Coco Maria and Anchorsong.